How Egypt Changed My Life & Prepared Me for the Great Awakening

One of the most powerful spiritual experiences I’ve ever had happened in Egypt last year. February 28, 2020 to be exact. Little did I know then just how much that one day in Karnak would change my world and direct my actions in the months to come.

Curiously, while writing this blog piece, I looked up the numerical value of that specific February date and see that it adds up to 16 (2+2+8+2+0+2+2+0). “16” is the number of spiritual transformation and can often represent itself as a Spiritual Lightning Strike of Awakening. It is known to spark intuition in ways that warn of danger and unexpected changes to come. And wow, that's exactly what it did.

The number 16 further breaks down to “7” (1+6), and this is the number that has manifested great changes for me personally. I can look back at major dates in my life (my father’s passing when I was 16; the day I met my husband; the day I married him, etc.) – they all happened on a “7” day. I've come to realize that this critical vibrational number teaches me about honesty, faithfulness, truth, and about trusting in the process.

What I’m about to share is indeed controversial while most of mankind is experiencing a "global pandemic” which seemed to have evolved like wildfire the moment I returned from my memorable, fifteen-day vacation in Egypt barely a year ago.

Though I had several spiritual experiences while visiting ancient Egypt, none was so powerful as in Karnak at Ptah Temple, when standing inside Hathor's chapel faced with the statute of Sekhmet – Warrior Goddess of Healing. I'd been in line, encouraged to do so by my tour guide, who told me that the lioness goddess would give me a message. The dim room, lit only by a small open hole in the ceiling above her, had me a little skeptical for I approached her somewhat dubiously, wondering if I could actually receive a message from an ancient piece of stone. I decided to look into her eyes in hopes this might strengthen my connection.

Immediately, a gush of energy poured toward me like a surge of wind that blew powerfully against my face and chest. An image of magnificent wings wrapping around me stood vivid in my mind. I literally felt the weight of those wings upon my shoulders. A voice sounded then, speaking clearly in my right ear. “You are safe,” a feminine voice said. I had seen the great-winged goddess on hieroglyphed walls, but knew little about her. I found out later she is called Ma’at – the Goddess of Truth, Justice, and Wisdom.

I was somewhat confused at the message just given me – You are safe – for not once did I feel unsafe there. I remember thinking at the time that it seemed a bit generic, this message. And why would I need protective wings? I then gave Sekhmet my complete focus and asked, "what message do you have for me today?"

As clearly as before (again, in my right ear), I heard with intensity, "Stay faithful." I paused, a little uncertain, asking what it was that I was to be faithful to, or for? The voice responded. "To your journey. Stay faithful to your journey," she concluded.

I walked away feeling somewhat dazed and approached my eighteen-year-old granddaughter, Brienne, who was with me during the trip. I asked her what message she had received. She’d been in line just ahead of me. Excited, she said she'd experienced clear clairvoyant images – vivid hieroglyphs within her mind’s eye, though she knew not what they were. We learned later that they were major power and protection symbols.

I shared my personal message from Sekhmet with Brienne then, ending with this comment: "…and I have no idea why I was told that." The instant that line tumbled from my mouth, a force like no other billowed inside me; it was the most intensifying shift of energy I’ve ever experienced in my life. It literally JUMPED into my body and burst me to tears.

That idea was quickly replaced with the real truth. Upon arriving back home to the United States, the spread of the Covid virus began shaking the world in a fearful tizzy. Only, my reaction to what was going on was completely opposite to everyone else. I’m wondering why in the heck was everyone acting as if they were under some Hitler-like spell by the media. Just going into a grocery store with so many masked-faced people felt like I was living in a sci-fi movie. I’d recently done a research project for a healthcare business company on HIV and the yearly flu, and I knew the statistics of those conditions and the fatality rate was way worse than this virus. Something wasn't right. Something didn't feel right.

It took me a couple of weeks of undergoing great confusion, anger, and annoyance that was strangely increasing every day for me. I was so very angry at society for being ignorant and acting like they were under hypnosis by the media, which was only manifesting more and more people to "attract" and spread the virus with their global focus on fear (the law of attraction in big action!). I was so distraught and confused at my anger as I rarely have such negative emotions, I was determined to meditate about it, for I was desperate to know why I was feeling this way, and if I was in the wrong.

I waited til morning so my mind would be clear and fresh. I sat down at my meditation spot and lit a candle. The moment I did, the same exact experience I had in Egypt reenacted. It was amazing; it was like déjà vu. I saw Ma'at's wings enfold me, felt them against my shoulders, instantly heard the same voice clearly speaking in my right ear. "You are safe. Stay faithful to your journey." But this time, there were added words: "We are ONE. We are not separate. You are in this world, but you are not to be of it."

The messages continued about what was happening and how humanity was being pulled to the opposite of ONENESS by world corruption. I was told that the media and the government were keeping secrets, telling many lies, that a lot of conspiracy theories were actual facts and were yet to be revealed, though, some will never be revealed for they are so horrid.

I was encouraged not to give away my power ... that I was not to give into any of the fear of the world. I was completely safe and so was my family and anyone who visited my home and property. I was also told not to wear a mask. To do so would only support others' fears, assist in their ongoing belief that they have something to fear, and shows others that we are separate and are supposed to be separate. My purpose here is to be a light, walk my truth, and set an example for humanity. I was assured there were other highly-spiritual lightworkers who knew the truth, who were doing the same. After much research, I found that to be true. A whole new world opened up for me.

To live in a world of rampant fear with billions of masked-faces, I had to respect those around me. I went from mask-less intermingling with society to using drive-through windows, making grocery click lists for curbside pickup or receive deliveries to my home. Vacations now involve driving my car more locally rather than taking a plane, and renting beach homes and property where I can enjoy and have fun with my family and friends who feel safe to be mask-free when together.

I was assured by Spirit that those who do not wear a mask, who believe in our true ONENESS and know we are not to be separated or distanced from one another, will serve as LIGHT unto the world and contribute to the healing needed on the planet. Yes, Covid is real, but things are not what they seem. This is all Spirit is allowing me to say at this time.

We're living in an era of Great Awakening – but more importantly now – for the HOPE of awakening. It's time for humanity to recognize what's happening, to realize where their power is, where it's gone. It's time to question what you are being told, and to make sense of the things that are crazily not making sense anymore. Research the truth about the whys behind all this enslavement, about our falling economy, and all the wreckage that has increased suicide rates, depression, alcoholism, and all those things that strip humanity from peaceful, loving, and liberated lives.

I check in with Spirit daily. I believe and trust in the Love of Spirit and the messages I receive from this magnificent Higher Intelligence known as God, Infinite Consciousness, Allah, Yahweh, All There Is, the Great Spirit, Creator Source Energy, the Great Mother, The Cosmos, the I Am Presence ... whatever you wish to call the ONE we're all connected to. They are One, and the same.

I've held back in sharing my story with the world until now, waiting for Spirit to let me know when the time is right. "It's time," I heard yesterday. "Many are awakening and searching for truth. Patriots, truthseekers, bearing hope for a better tomorrow. Speak, share, and unite with them, Dear One ... and with your fellow lightworkers who believe in the miracle.”

If you're looking for online training for personal & spiritual development, be sure to visit the new CHHAC Online Academy. Topics of study include strengthening your intuition, mediumship development, Tarot & Oracle card reading, numerology, symbology, spirit guides, energy healing, and more. 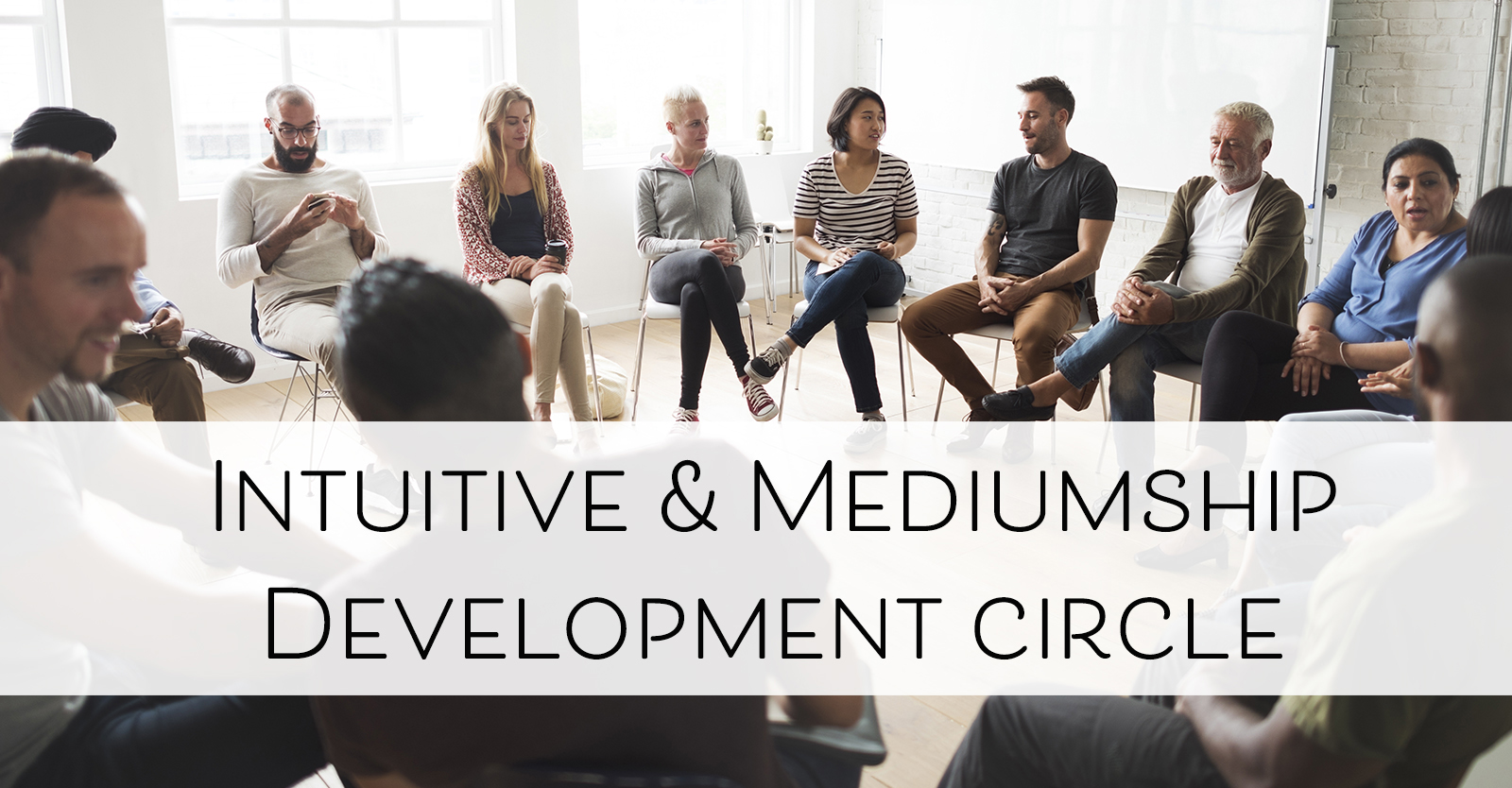 Visit us on meetup for our weekly events!

This group circle is for those interested in personal and spiritual development. You will learn how to strengthen your intuitive and mediumship skills, as well as gain fellowship with like-minded people. Other holistic arts include Reiki training, energy healing, card reading instruction, yoga exercise, and more. Meetings are held weekly in Chesterfield, VA.